Bernese Mountain Dogs are generally great family dogs. They are particularly fond of children, and are not so fidgety when it comes to strangers around them or other animals around them. As long as you train them right, and early on, to be comfortable around strangers and other animals, they will pose no real issue regarding strangers and other pets. How can anyone possibly resist a dog this mild-mannered, naturally sociable, and have a great relationship with humans?

If you want a dog which your children will love, a dog which will require minimal grooming (albeit a heavy shedder), a dog which would love to work for you no matter what that task may be, and a dog which you will cherish for as long as it lives, there is no better breed of dog other than the Bernese Mountain Dog.What are you waiting for? These dogs might pull for a living but they will not pull themselves to you; get your very own Bernese Mountain Dog puppy now and start making it work. You are certainly not going to regret getting one of these magnificent dogs. 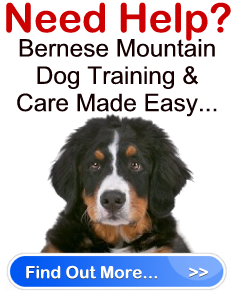